Tea at the tower 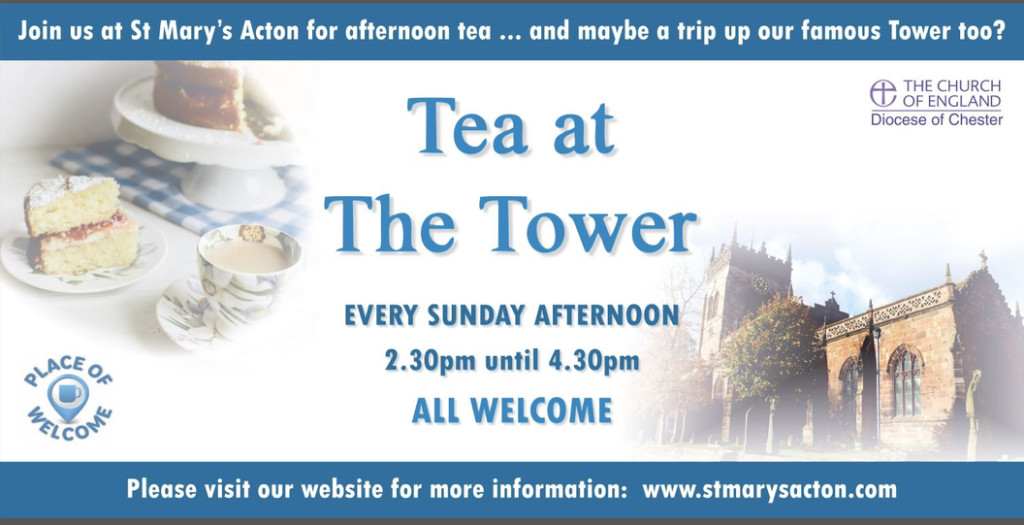 If you’re ever near Nantwich in Cheshire on a Sunday afternoon, make sure you head to St Mary’s Acton (a walk of about a mile out of town) for Tea at the Tower from 2.30pm to 4.30pm (temporarily suspended because of the pandemic, of course, but do keep checking the webpage).

Providing a warm welcome will be co-founders of the initiative Deanna Emerton and Steve Davies (the churchwarden). They began hosting the teas as they wanted to combat social loneliness – a much-discussed topic in the press – by providing a place to meet, a cuppa and a cake.

The project celebrated its third birthday in March this year (2020).

I asked Deanna how it all began. “We started it because there was so much in the press about people being lonely and having nowhere to go. We decided to do it on a Sunday afternoon because the heating would be on, because we have 8am and 11am services and then we have Evensong, but in the afternoon the church is empty.

“It is a large church for a small village and goes back to 1180; we have bits of Saxon. Under the tower, the sort of narthex area is an open space and we decided – this was me and Steve Davies – to try and do tea and cake, and we wouldn’t charge for it and would just ask people for donations.

“Basically, we weren’t interested at the time in the money, we were interested in trying to help people who were lonely. We thought we’d give it six weeks, which we did, and we were hoping for about 30 people and, say, £40 in collection – and we easily got that much, very easily.” 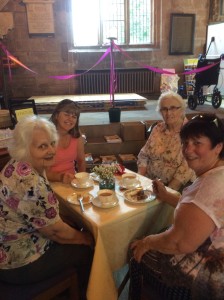 Who is involved in the project?
“Each week, three people make two cakes each. Their turn comes around about every six to eight weeks and they donate the cakes. We don’t have any money; we don’t pay anybody. The only cost from the church is the electricity, the heating and the water, so really it runs on a shoestring.”

Do any others contribute?
“We were lucky, because when we’d been going about six months a local estate agent reached 25 years in business and was giving some money away to celebrate. We applied and we got £500 and bought eight tables and covers. Before this we were using my old card tables, which were very rickety.

“A lot of people have given us their nice crockery because they can’t put it in their dishwashers, and we have flowers on the tables every week so it looks nice when you come in.

“We started by trying to get a core of people who would come each week, because if you go into somewhere and it’s empty, it’s not very welcoming – we have about four or five groups of, say, four or five who come every week to meet and chat and have a cup of tea from 2.30pm to 4.30pm. And when we have Evensong at 5pm, a few will stay on.

“There is also a walking group that have become regulars. They approached us and they now meet at 1pm, go off and walk, and then come back and have a cup of tea and a cake. That happens about once a month.

“We applied to Morrisons and they give us flour and sugar and serviettes, and coffee and tea.” 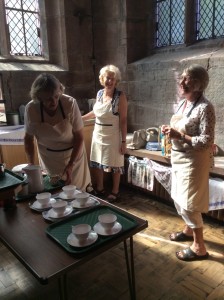 It sounds like a great gathering
“We also had a group called Walking the ‘Wong Way’, run by a Mr Wong from Warrington. It was quite amusing because they rang up and said they were going to be fifty and that frightened us a bit, so we decided we’d have to charge them. Sixty came and they were charming. Luckily, we’d prepared for that and had procured more cakes, more tables and more chairs.

“They were thrilled and, with them and our regulars, we took £500 that day. It was really, really amazing. They are going to come again when the weather is better. We also get the odd homeless person and one or two people from the boats on the canal – some of them come every week. And also people who have been walking along the canal – Australians and Americans, all kinds.

So it’s a success?
“We didn’t do the teas for the money. We just have a glass jar saying ‘donations’ on it and after two and a half years we’d made £20,000. People are so generous; it’s amazing.

“We advertise it a lot, we have leaflets at all the doctors’ surgeries too. It is purely about being a community. Although we are meeting in a church there will be no hymns and no prayers.”

And you two run it?
“Steve Davies and I run it. We obviously went to the vicar and the PCC to check if we could do it and they agreed, but we haven’t really had a committee as such. We certainly listen to people if they have suggestions.”

It sounds like a lovely setting
“The church is a mile out of Nantwich and it’s not on a very main road, so people can walk from Nantwich up to Acton, have a cup of tea and then walk back along the canal. In a way, we’ve become an attraction.

“And when they come, Steve, who is the Churchwarden and a bell-ringer, takes them up the tower. They can go up to the ringing chamber and he tells them all about the bells and then I do a tour of the church building itself. People are really interested.”

How do you two cope?
“I go every week. I am retired. I’m a gardener and hate leaving my garden, so if we go away we’d perhaps have two or three days in the week. I hardly ever miss a Sunday and if I do, which is rare, then Steve is there. He’s similar.

“We get far more back than we give. We have a lady, in her nineties – they had a business in the town, painters and decorators, and her husband is buried in our church – she was passing the door of the church and I said, ‘Come and have a cup of tea’ and she said ‘Ooh no, I’m a Methodist’ I said, ‘Well, we don’t mind’. Well, she came in and has been to Tea at the Tower every Sunday since. She said to me, ‘Sunday used to be the worst day and now it’s the best day’!

“We live next door to the vicarage and have our own path to church, which is dead handy if we run out of anything. A path through the wood.”

Have there been any changes at the church?
“We’ve just had a toilet built on the side of the church. It was built of stone, and it cost between £60,000 and £70,000. We had to have an extension, as we are Grade I, and it was dreadful trying to get all the permissions – it took ages. The toilet was opened last November (2019) and it has made all the difference. Previously, we had two toilets in Alms Houses in the churchyard, but it’s a walk and for older people it was too much.

“We had our quinquennial inspection last year too, and the architect tells us we need to spend £300,000 over the next five years on repairing the leadwork, stonework and windows. So that’s where any money raised is going to go.

“Tea at the Tower has become really important to people and we will carry it on.”