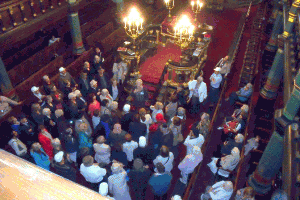 Image from one of our members, Jewish Heritage UK

This page provides a list of current and recent past consultations with government (some of them informal), and our response where we have made one.

Church of England Review of the Mission and Pastoral Measure

Consultation on a review of the Mission and Pastoral Measure of 2011, which deals inter alia with parochial reorganisation and the disposal of church building no longer needed for regular public worship. Deadline for responses 30 September 2021. Consultation and associated materials at https://www.churchofengland.org/resources/parish-reorganisation-and-church-property/review-mission-and-pastoral-measure-2011

2 July 2021: Parliamentary answer to a written question about Protect and Places of Worship.

CLOSED: Feed into a refresh of Historic England’s and the University of  York’s Statements of Significance on-line tool

Our response to the government’s consultation on the Shale Wealth Fund.

CLOSED: 2012 consultation on details of changes to Listed Places of Worship Grant Scheme

The government has begun a short consultation on the details of the changes to the LPWGS, so that it will cover alterations as well as repairs. The deadline for response is 13 July 2012. The consultation paper is here.

HRBA Response to DCMS and HMRC re: consulation on details of changes to the Listed Places of Worship Grant Scheme

Result: The government extended the scheme to the end of the present Parliament.

The Government is introducing a small donations scheme for Gift Aid from April 2013. The HRBA is not responding to this consultation. The deadline for responses is 25 May 2012, and details may be found here http://tinyurl.com/ctjawem (opens in a new window).

Update 30 June 2012: The Government has published the Small Charitable Donations Bill, together with the customary Explanatory Notes. Also released was a summary of responses to the consultation on the detail of the Gift Aid Small Donations Scheme – and many of the views expressed – though not all – have evidently been fed into the drafting of the Bill, though much of the detail remains to be filled in by the detailed Regulations currently in preparation.

In the Budget of March 2012 the Government announced that there would be a cap on tax relief for charitable giving. The Heritage Alliance supports a campaign against this new tax burden (see  The Heritage Alliance News page). Members of the HRBA are encouraged to consider signing the ‘Give it back, George’ campaign at http://giveitbackgeorge.org/ (opens in new window)

In the Budget of March 2012 the Government announced that VAT on alterations to listed buildings (including places of worship) would in future be zero-rated for VAT. To mitigate this, the sum of £5m would be added to the Listed Places of Worship Grant Scheme (LWPGS) annual budget.

The HRBA supported the stance of the the Heritage Alliance, and itself wrote to the Chancellor soon after the initial announcement (but before the figure of £5m had been announced)

Subsequently, on 16 May the HRBA responded formally to the consultation

Subsequently it was announced that the sum of £30m (rather than £5m) would be added to the LWPGS. Discussions are ongoing (22 May 2012) about the details of this (and see the consultation on details to the LWPGS noted in an entry earlier on this page).

The following government documents are relevant, with the first one (the consultation document) being most important.

Update 28 June 2012. The Government has issued the results of its consultation over the planned changes to VAT. As regards the imposition of VAT on alterations to listed buildings, there has been a useful softening of the transitional arrangements. The details may be found on page 24 of the summary of responses.

At the end of 2011 the Government asked for our informal views on how to distribute a one-off capital grant. Our response is here. The Government announced it is distributing the money via the hybrid option.