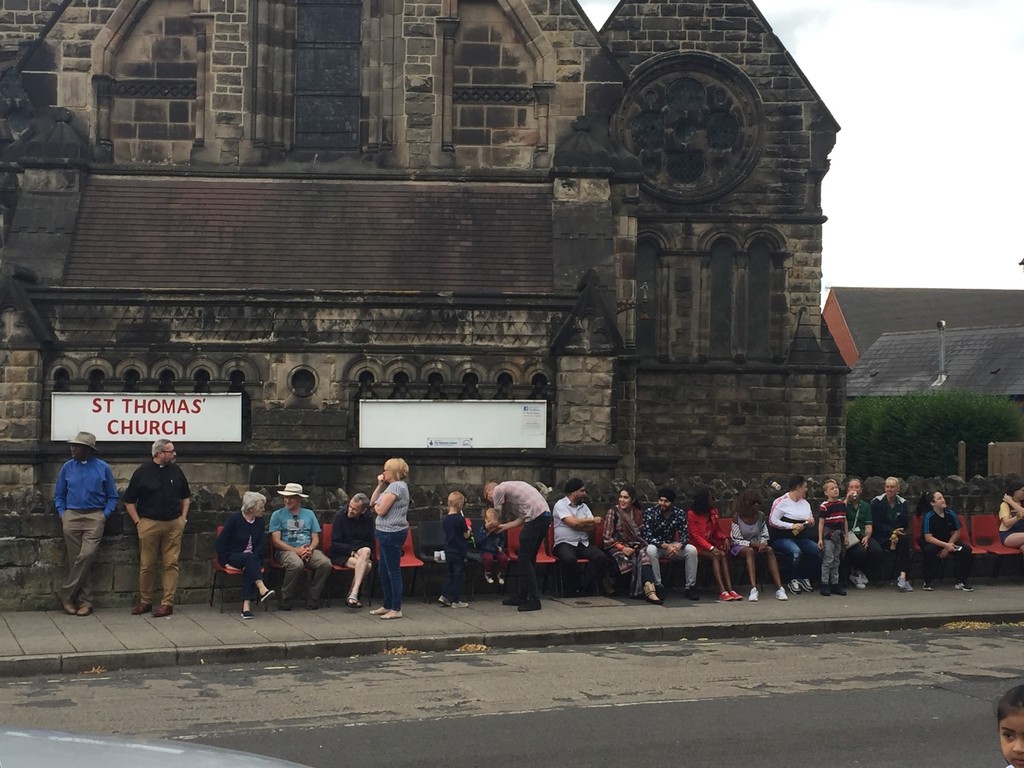 Before the coronavirus lockdown, your Roving Reporter learnt about the St Thomas project, in inner city Derby.

St Thomas’s church was built in 1881. Eight years ago it was closed, but it has now re-opened and renewed its relationship with local people, providing support of all kinds.

“You walk into the door now and it’s this big open space. It now feels more like a monastery than a parish church. . .  we now call ourselves the St Thomas Community.”

For the last nine years, he and his emerging congregation at St Thomas’s in Pear Tree, have focused on repairing, restoring and reopening the grade II church and reaching out to their neighbours. All at the same time.

The building is special. Designed by the rogue architect Joseph Peacock, the church was built in a Romanesque style of rock-faced masonry in 1881. And it features a ‘wheel window’ depicting Christ in Majesty and other fine stained-glass works by Joseph Nuttgens.

I asked him about the path they’d taken towards building a new church-based community which is based on monastery-styled living and usage of sacred space.

He explained that he was “appointed to the church in 2011 as a community minister. My main role was to build bridges to try and connect the church back to the community. The church building was closed two weeks after I arrived, and the congregation moved to the church down the road.

The Diocese of Derby had the vision to appoint me anyway. This is an area which is very multi-cultural with a number of asylum-seekers and immigrant communities. The Church of England has had to reimagine its ministry.”

What was your vision?
“I tried to re-orientate the way we looked at church and turn it from being inward to outward facing. How do we use the building to be more in tune with the needs of the community?

I was privileged to have the first year to listen and ponder what I was going to do.  I am lucky as any vicar doing this alongside their day job would burn out… but this has been my day job, I haven’t had to keep a PCC happy, I haven’t got to prepare a church service on Sunday morning, I haven’t got to do funerals or weddings or baptisms.

Furthermore, I used to be a regeneration manager in east London. I have ten years’ experience in working with partners and making connections. I’ve done exactly the same in Derby. I know about funding bids and project management – it’s what I did for a living. That’s why I am so grateful to combine my skills and calling to the Ministry.”

We spent a lot of time praying, a very small group of us, no more than 3, 4, 5 starting our journey in prayer.” 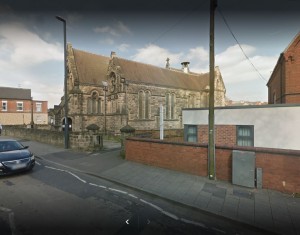 “The building was the big issue. There had been poor maintenance, massive water leakage and it was in a state of disrepair. The floor was giving way. It wasn’t fit for purpose.

However, we decided to reopen it because if we had closed the church and boarded up the windows, you’re basically saying the Church of England isn’t interested in this community.

Even if we’d opened a café next door which is an idea that I explored at one point, you’ve got the church sitting there saying we’re closed.

In fact, it is also in an ideal location – right next to the health centre, the police station and the library on the main shopping street. It’s also got a green space across the road from the church, it’s not very big but it’s the only bit of communal green space in the whole road – and we can put a temporary canopy over it every now and then – and we have activities– I laugh – I call it the village green – it’s where people can start a community.”

What kind of community lives around the church?
“This area is the first port of call for any immigrant community into Derby and the East Midlands. It is home to a large percentage of asylum seekers and 30% are private renters, so it’s in a constant state of change, which is the nature of the inner-city. 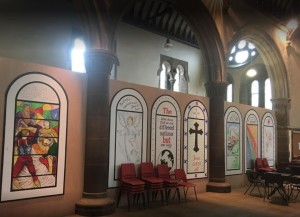 So, where did you start?
“The north aisle was OK to use so we boxed it into a temporary wooden structure and opened up the north door. And we took collections from the food industry – working with an organisation called FareShare – and stored that and then charities distributed it.

For about 18 months we effectively became a food warehouse. It was about stressing to the community that this building is not closed.”

What about the rest of the building?
“We managed to get a grant from the Heritage Lottery Fund’s GPOW programme which enabled us to literally stop the rot. We had the organ taken out, the roof redesigned and all the stonework on the top repointed and we had the floor replaced. Urgent high-level repairs were done.” 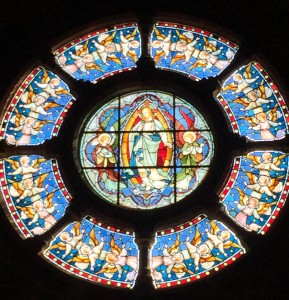 Was it all sorted then?
“In the midst of this work we discovered to our horror that the East Rose window was popping out and could fall and shatter, possibly through WWII damage.

We prayed about whether we should carry on, however a vision was emerging about becoming a centre where we could reach out to people in need.

I went back to the Lottery and we got a second HLF GPOW grant.

That was primarily for the window. It was taken out and stored while the apex stones were removed and an RSJ steel girder was installed. Then the stonework was replaced and then we replaced the window piece by piece. It looks absolutely stunning and people are amazed at this hidden gem in the inner city

You are exploring a vision based on monastery-styled living?
“To do the works we had to take out all the pews and put them in the side aisles, behind screens and we now have a completely empty floor which we levelled.

So, you walk into the door now and it’s this big open space. It now feels more like a monastery than a parish church. 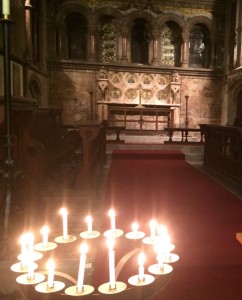 With George Lings, who headed up the Church Army’s Research Unit until retiring, we looked at using the different sacred spaces that are created in a church.

The side chapel became our prayer cell. We’ve got candles, icons, prayer facilities… icons because a lot of East European Orthodox and Catholics regularly use the space.

The chancel, now restored with that wonderful window, is our chapel. The little group has grown to about 15. We have weekly services on a Sunday afternoon.

The refectory is where we eat – we put out some tables and chairs in the middle of the church (and serve from the new kitchen). People love the fact that we all sit around the table, there is a sense of equality rather than sitting in rows facing the front. It’s very equal. It’s not I stand up one end and tell you what to do. We’ve also been feeding schoolchildren who’ve not been able to have meals in schools during the summer.

We’ve turned the old food bank into our chapter room, where we have our meetings, my office, storage for the stuff we use…

And at the back of church is where I laughingly call the cloister – where the church meets the outside, here we have recently hosted a school uniform shop and we want to develop a number of projects that help people at their point o of need.”

What are your future plans?
“The next plan is to create a mezzanine floor in the side aisle and have two floors. If you go back to the monastery idea, they had the infirmary on the ground floor, where people were cared for, so we want to create breakout rooms for training and pop-in advice.

On the first floor… well the old monks had gardens where they worked really hard and produced the wine and the ale and the vegetables… we want to create 21st Century workspace – offering hot desk space and introduce IT where people can work and get business support.

We’re now looking at the church hall at the rear. It’s an eyesore… we’re thinking about knocking it down and providing supported housing.

This will give people who are have not been looked after by the state – homeless people, asylum seekers, refugees and trafficked people – a place they can move on to before they have to get their own place and settle in the community at large.  – Like a monastery they can potentially work and live on site And the church will become a centre for a range of partners to offer holistic care for people to build resilience; through a needs-led support that empowers them to plan for the future. This includes: life skills, budgetary skills, training, education and employment. All of this will be offered in a Christian context of care and support but intentionally welcoming to all as the aim is to encourage individuals to gradually integrate into local communities and thrive in all aspects of life.

We are seeking to adopt a rhythm of life that is about focusing on prayer and serving others. We are becoming members of the Society of the Holy Trinity – a national network of like-minded communities.

If you become a community would that mean a legal change in your status?
“We’re just exploring that. It could be a lay community; it doesn’t have to be vicar-led. It could be a group of Christians serving in the community and they could become servants in support of the church rather than being a church congregation that would have to pay a parish share and would have to be part of the Diocese and another church to keep open… ”

Would the church remain a CofE building?
“We are having BIG conversations about that and haven’t come to a conclusion.

We are exploring whether a charity could run the new breakout spaces alongside the St Thomas’ Community. So we are talking to a number of people who have delivered similar projects elsewhere. And we have joined an organisation led by Revd Dr  Sam Wells  called Heart Edge which is based at St Martin-in-the-Field and is based on checking your building has the four C’s

Culture, the arts – we have our paintings, artist’s groups etc

Commerce… working with the business community

Congregation… how do you grow it?”

We’d like it to remain consecrated and part of the wider church, but it’s not just an Anglican parish church anymore so it doesn’t necessarily have to be called a parish church.”

For more information about St Thomas, Derby go to https://www.achurchnearyou.com/church/13352/service-and-events/events-regular/

We understand that during the coronavirus lockdown, members of St Thomas’ Community will be gathering privately on line for prayer at the following times: