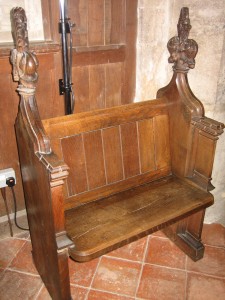 It’s pews vs space. The age-old problem, now more pressing than ever. While some churches have put their pews on wheels, a church in Suffolk has created innovative and – to my mind – beautiful Pewlets!

The beautiful, carved bench ends are kept, but the pew shortened to form a chair.

It all began at Wortham St Mary a church which was given permission to create eight Pewlets and have gone ahead with five. Over the last 8-10 years, eight other churches in the same Diocese were granted similar permission.

I asked James Halsall of the Diocesan Advisory Committee for the Care of Churches and Pastoral Secretary of the Diocese of St Edmundsbury and Ipswich how this idea came about.

Whose idea were the Pewlets?

“I should imagine that it was a collective view in the DAC. We were blessed or cursed with some splendid bench ends either Medieval or Victorian ends at Wortham and many other churches – and they would be very difficult or impossible to dispose of.

So, if somebody is wanting to create space, usually at the west end because of post-service activities – tea and coffee and a natter – then what do you do if you are heavily pewed?

It was recognised that backs of the actual benches that we sit on may well have been replaced over subsequent centuries and therefore, are much less important than the ends.

So why not keep the ends and create a one or two seater – which is either movable – although to be honest they are still very, very heavy – but more likely can be put up against the wall to create the required space?”

“Suffolk has an annual agricultural show and the diocese usually has a marquee. About four or five years ago I was asked to do a display about church buildings and I had a whole array of church chairs from suppliers – half a dozen or so – and I borrowed the Pewlet from Wortham.

I had a sort of ad hoc competition so that people could come and road test the chairs . And the Pewlet was favourite as people saw the benefit in retaining something familiar.”

“We have good craftsmen across the county. We like to encourage local craftspeople to be involved with their local church building so if there is somebody we feel is able to do it then we are more than happy for them to tackle it. It’s pretty straightforward but we need to make sure it is going to be done well and not with a chainsaw or glue or something.”

What’s behind the need for Pewlets?

“On one hand we can be saying yes, use your building as a community resource and on the other we’re potentially saying, aah but you can’t take any pews out.

But I think that the DAC, Historic England and the Society for the Protection of Ancient Buildings and others are realising that the future of church buildings relies on them being used for more than just Sunday worship.

Therefore, some adaptations to the furniture should be allowed .”

What if the whole bench is medieval or historically valuable?
“The only time it has been frustrating is where the bench is obviously medieval or has a carved back or has some interesting graffiti on it. Perhaps then that pew should be retained and moved somewhere else in the building.

We are happy as the DAC to visit the church and try and find a way to get them through the hoops and hurdles to get them the building that they want.”

“The worst ever meeting that I attended –about three years ago – was at a church’s open evening. There were flaws before we got to this stage but the PCC had done some research and they thought that a loo and a kitchen and a space at the west end where there could be a lunch club for the elderly and a parent and toddlers groups could be held would be a good thing. They’d asked their architect for some designs and had an open evening for the wider community and I was asked to attend. It was horrendous. The PCC had assumed that this was what people wanted: so they said, ‘here you are, we think this is what you want and this is what we are going to deliver…’ and it wasn’t. Most people who attended the meeting were not churchgoers but they saw it as their church and were horrified at the idea of taking the pews out!

The loo and the kitchen were fine but it was the pews… the word ‘desecration’ was used.

It was horrendous and the PCC had to drop its plans. So, there is something deep-seated in people’s psyche that church equals pews, pews equal church and you mess with that at your peril.

Pewlets might work but they had their fingers well and truly burnt that evening and are still licking their wounds.“

Why do you think even non-churchgoers are so attached to pews?

Have the Pewlets been widely adopted?

“News is spread through word of mouth and people look to see what another church has done. That is a very, very slow process so whilst it may have been eight or ten years since Wortham did it, people are only now – despite it being a case study in the Ecclesiological Society’s publication and us describing them on our website and my talking about them and also being at the county show… People are still saying really is that possible?

Do most requests get approved by the DAC?

“Yes, when we get a formal application, normally we will have known about it in advance. As the DAC we try and operate a can-do helpful attitude towards the PCC and the clergy. If you’re thinking about changing something it’s best to give us a shout early on and we’ll come out and discuss how it is achievable.

The problem can be if proposals have been brewing quietly and then all of a sudden they land a fait accompli on the desk and say: ‘right we’ve got the money, we want to start next week…’

Read more on the subject:

The Pewlets at Wortham, Suffolk feature as Case Study 7 Using old bench ends to make short benches: Wortham, Suffolk in Part 5, Section 29 of Pews, Benches and Chairs: Church seating in English parish churches from the fourteenth century to the present edited by Trevor Cooper and Sarah Brown, The Ecclesiological Society, 2011 It can be downloaded from here http://ecclsoc.org/resources/downloads/page/3/