Making the most of heritage: St Mary Magdalene, Hucknall 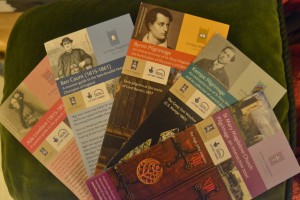 In this interview, I explore in some depth the thinking behind the interpretative material and how it was produced. There are useful hints here for any church considering how to encourage enjoyment and understanding of its heritage.

The church has much to show off. It is not only the final resting place of Romantic poet Lord Byron but also of his daughter Ada Lovelace, who has become increasingly recognised for her work on the Analytical Engine, Charles Babbage’s proposed mechanical general-purpose computer, back in the 1830s and 1840s.

Other local figures who are celebrMaated here include the bare-knuckle boxer ‘Big Ben’ Caunt, the Heavyweight Champion of England in the 1830s, and the twentieth-century composer Eric Coates. There is also a section devoted to the 20 stained glass windows produced by the famous Kempe Studios in London – fine examples of the Victorian Gothic Revival.

So, how did the church go about researching and promoting its heritage? 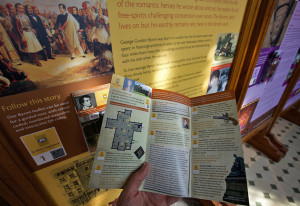 I spoke to Hucknall businessman Adrian Sissons, who led the community heritage part of a major project carried out by the church. The project received a National Lottery Heritage Fund (NHLF) grant, including funding to repair the fabric of the building.

How did you get involved?
“The then churchwarden David Hosking asked if I knew of anyone to help [with the grant application] and we stepped in. The thrust of the application was about restoring the fabric of the building. The NLHF said that’s fine, but if we consider you and thousands of other churches what have you got from a heritage and history point of view and how are you going to engage people outside the church in that heritage?

“This church’s heritage has international appeal, but we needed to find ways of promoting the links to Lord Bryon and Ada Lovelace, and the Kempe windows, and ways of sharing this with the community.

“I am a member of the congregation at St Mary’s, but I also do this kind of work as a consultant, so we created a presentation to galvanise both the PCC and the wider church community.

“We were granted about £130,000, and my consultancy was appointed as heritage consultant and oversaw the entire project. Our aim was to create a heritage hub on a par with nearby National Trust/English Heritage properties.”

How did you get the research together?
“We engaged local historians; some were from the official heritage tourism office and some from local community history societies, such as the Coates Society, the Newstead Abbey Byron Society and the Hucknall History Society. Some were identified by the church, which had an existing relationship with them, and others we knew.

“It came as snippets written on pieces of paper, it could be formal literature, it could be books, and there were an awful lot of photographs, so we had to collate it and carry out an audit. There was so much to interpret, so we decided to focus on five main themes: the church, Lord Bryon, Ada Lovelace, Ben Caunt and the Kempe Windows. We also wanted to create a new brand approach.

“We wanted to interest people in this heritage so that even those who didn’t attend church would visit. With proper displays and guided tours, and an area for refreshments, we could offer a proper visitor’s day out.

“In the end, there were seventeen different strands that were brought together. Our writer produced an interpretation of each subject and we decided where each was situated within the church. 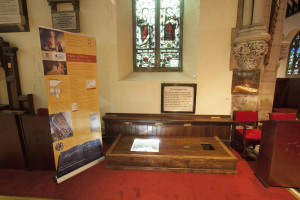 “Each main piece needed to be no more than 300 words, including titles and links. This became a systemised approach, which was used in the initial exhibition, in the detailed pamphlets we produced, in the notices around the church and on the website. Each strand has a self-guided tour or you can be taken around by a steward.”

Ada Lovelace is becoming increasingly interesting to people! She even turned up in Dr Who! (Spyfall, Part 2).

“Yes. The church was visited by a gentleman who turned up from the U. S. Air Force and told us that when they were looking for a name for a new secret computer language they named it Ada because of her work in mathematics and coding.”

What steps do you think churches should take to understand their heritage?

“A common factor we find among churches involved in these projects is that they benefit from somebody from outside the church – a consultant or a company or person unconnected to the PCC – to look at it from the outside.

“Often people are so close to their history that they don’t always see it. Churches can be concentrated on congregations and mission, so sometimes it takes an outsider…”

How do you suggest churches go about gathering information?

“Widening the net is one way: run something in the local paper, use Facebook groups and social media to start. Also, most PCCs are quite well connected locally. And members can put an appeal out through their networks. Churches with social media should use it and those that do not have it should create it.”

How do churches add weight to their applications?

“Two professors from Nottingham University came to assist us with research and lent their names to our application, as well as leading local figures and public sector organisations, such as the district and county councils. A key factor when putting together the activity plan for the NLHF was the associations and links we had with local groups, such as the Coates Society, and the Newstead Abbey Byron Society. These were good partnerships that made our programme of activities stronger.”

You included QPR coding etc. in the displays. Do people enjoy that?

“Very much so. But we were careful not to go too far down that route, as the church community were very clear that they did not want the church to become a museum, plastered with new technology and TV screens. Once the conventional material had been put in they realised that digital elements provided a wider appeal. So, things can be updated…

“While the church does not have a Wi-Fi connection we are in the centre of the town, so the 4G signal is no problem. And using the QR coding adds a lot. For instance, if someone has made a pilgrimage from Greece to particularly see Byron’s tomb, their only way to see what is inside the tomb is to either read one of our printed leaflets or scan one of the QR codes. This will show you a video of the scene below the floor of the chancel, which can be a little bit grim but certainly ticks a box for some, especially if they have made that kind of pilgrimage.”

Did the visitor numbers go up after the update?

“The church had always attracted visitors, but yes, there was a spike of about 25% in visitor numbers. But then they went into interregnum, losing their vicar about 12 months after the project finished, which lasted for about 3 years, so no changes could be made. The lack of a leader did make a difference. The church finally got a new vicar, but then Covid arrived.”

Did you look at providing material for children?

“There are also life-size figures, with Ada’s rendered in code and Bryon’s in bits of poems and words. The children can see that Ben Caunt was a 6-foot-2 ½-inch bare-knuckle boxer, compared to Ada who was diminutive.”

You trained volunteers as part of the project?

“We identified we needed 50 volunteers and got about 42, and we offered training, part of which was to give people confidence to lead tours and tell people about St Mary’s heritage. We also wanted to make their offerings more consistent. And we had learned new facts and ways of looking at historical figures during the research, so it was important to share this. They enjoyed being given more material to work with and a walk-through of the tours and key topics.”

How did you advertise?

“I encouraged the church to join Visit Nottinghamshire as a member. Hucknall is about 8–10miles from Nottingham and they promote the church and have our leaflets in the tourism centre in Nottingham where they help (pre-Covid) hundreds of thousands of visitors a year. They promote trips to Hucknall, which became easier once the tram from the centre of Nottingham was extended out to Hucknall.”

I suppose Covid-19 has affected visits?

“The way we interact has changed considerably! There are limitations on group sizes and on what can be done – exhibits that could have been physically handled are now behind glass. We need a booking system for both visitors and the stewards of course…

“It is a minefield because, as everyone knows, the guidance changes on a weekly or even daily basis.

“In the meantime, do visit the website – the heritage pages provide a huge amount of information on Byron, Ada, Eric and Ben. A taster for when St Mary Magdalene can once again welcome visitors properly!”