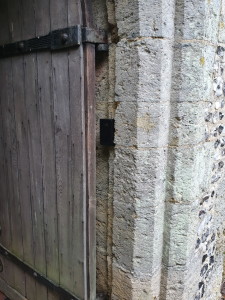 “We hardly get any visitors” can be something of a refrain from churches. The truth is they sometimes don’t actually have a record of their visitor numbers. But by using a simple battery-driven digital counter, now they can . . .

In 2018 the National Churches Trust (NCT) chose Horncastle Deanery, Lincolnshire, which consists of 54 churches, to work with, to encourage visitors and then count visitor numbers.

The one-year project entitled ‘Great Interpretations’ was funded by the National Lottery Heritage Fund, and the NCT worked with the churches on how they could make their buildings more accessible and welcoming. They also helped them look at how they could pursue marketing opportunities and increase their publicity.

Installing digital counters at the entrance to each church was a key way to get an initial idea of numbers and then to monitor and check if these increased.

The aim was to show two things: Firstly, how many visitors were coming into the churches and, secondly, to compare the number of people who write in a visitors’ book with the actual number of visitors; thus showing that churches get more visitors than they realise. 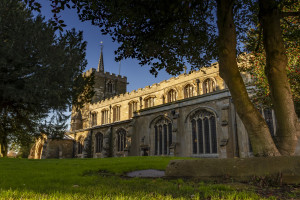 St Mary’s is the main church of the Deanery based in the market town of Horncastle, which has a population of about 8,000. The rector, Charles Patrick, is a keen believer in keeping churches open as much as possible. He was happy to have a counter installed.

“When I arrived at Horncastle five years ago the church was only opened for services, apart from in the summer between 10am and 2pm as long as it was manned. It was never opened unmanned. The view was that people were not that interested in the church and not many visitors actually came, and also that things might be taken, there might be vandalism”, the Revd Charles Patrick said.

“I saw the NCT project as a chance to use the counter and to prove that people would like to come and see what was inside. Not only from a visitor point of view but also from a spiritual point of view, with people possibly wanting some help or just a quiet place to sit and reflect.

“About a year before the NCT started the project, we had begun to open daily from Easter to the end of October, with stewards manning the church.

“That was in the summer of 2017 and people started to come in. Towards October it got cold and, as the stewards were quite elderly, the church was closed.

“What I was aiming for was for the church to be open, unmanned, all the time. The NCT project got the wardens to think again about opening the church and making it more visitor-focused.

“We installed the counter in June/July 2018. It’s two small boxes with an infrared beam, which are about four inches by about three inches and about an inch-and-a-half deep. We put them on the door frame of the main entrance of the church.

“The counter records in and out movements – you get your in-figures and out-figures and sometimes they’re different because we’ve got three different exits.

“The visitors’ book had not been used a great deal, and at the time when the counter was installed the wardens and PCC of the church still weren’t really convinced that it was worth investing in tourism in the church, but keeping it open was my key priority. 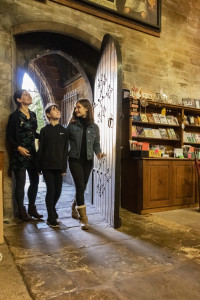 “The counter was installed and we decided to open the church doors from the time when I arrived, which was about 9.30am in the morning till 5pm at night. I noticed straightaway, when I was in the church working, that people were coming in on their own, some I knew and some I didn’t. There wasn’t vandalism or anything stolen. It wasn’t unusual to see at the end of the day that 100 people had come through the door.

“The counter gave us the evidence to show the PCC that people indeed sought to enter the church; by having the door open people were attracted to come into the building, more than what we ever thought.

“And people coming in became a deterrent to any theft or damage. We’d also moved the visitors’ book onto a table nearer the door and tried to create a bit more of a welcome, and people started to leave comments”.

Was the counting valid?
The Revd Charles Patrick explains: “We needed to work out how many times regular people, like the flower arrangers and the cleaners, went in and out. We spent a couple of days monitoring the doors and manually counting people. We were then able to deduct the regulars from a weekly average of the daily count to get a better count for visitor numbers.

“While the counter was installed, we had our annual Christmas Tree Festival. We knew it always attracted about 2,500 people over the weekend.

“At the end of the weekend the two totals were only 100 different, something like 2,100 on the digital and 2,200 on the hand-held. It gave us confidence that the clicker was basically accurate.

“We also had proof that people were coming into the church in their thousands – it was amazing and it made us change our minds about welcoming visitors. The other amazing thing was that we made our Giving Box a bit more noticeable and the giving doubled! The church is now open daily from 9.30am till dusk (obviously not right now because of the virus), when the warden will go and close it. It is also unmanned.

“The digital counter cost about £160. We were given it to use as part of the project, but if we had bought it we would have paid for it in two months.”

All the churches in the study had higher visitor numbers than they’d imagined, and realising this incentivised other churches to open. In Revesby, an estate village linked to the botanist Joseph Banks, the beautiful church had been shut except for services, as the wardens said nobody was interested in visiting it.

As part of this study, the NCT put a counter on the church’s porch entrance, which showed that people were coming all the way down the church path to the porch only to be disappointed on finding the church doors were shut.

It monitored something like a thousand clicks over a month and, as a result, they have now opened that church.

So the project proved useful?
“The counter gave us the proof in Horncastle that if the doors are open, people will come in! If a church wants to find out how many people are coming into their building then I would recommend getting a counter. It’s really beneficial,” said the Revd Charles Patrick.

Find out more about how to be a part of the Great Church Visitor Count project.

You can read more about the project here.