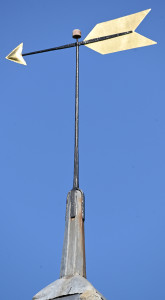 Burpham, West Sussex lies deep in the South Downs, at the end of a no-through road.

The parish church, dedicated to St Mary the Virgin, stands high above the Arun valley, and is a prominent landmark. It has a splendid late medieval tower, which was magnificently restored a few years ago after a major fundraising campaign.

Last year an anonymous donor had a simple but effective idea for further beautifying the church. But she wasn’t expecting to find bullet holes . . .

At the top of the tower is a weathervane. It had become seriously rusty and last year an anonymous villager – whom we will call Katie – paid for it to be regilded. This simple improvement has added light and movement and sparkle to the tower, especially when seen against a blue sky or glinting in the low evening sun.

What gave Katie the idea?

“I chatted to the churchwardens and looked through the quinquennial inspection report.

“The church is very well looked after by the congregation, with strong support from a Friends group. But as with most church councils, the focus has to be on urgent or structurally important repairs. The weathervane stood out for me as something which might have to wait for years, and might never come to the top of the list.”

During the summer Katie had analysed the visitors’ book, counting the number of visitors and where they were coming from.

“Some of the comments were remarkable. I came in turmoil but I left in peace, one person wrote. Another said My second visit to this wonderful church – the calming effect is remarkable, and another, The stillness is simply breathtaking.

“This didn’t surprise me. Ever since I’ve known St Mary’s, I’ve found it to be a very, very special place. Gilding the vane wasn’t strictly necessary, but that’s not the point – it showed what I and others felt about the building.” 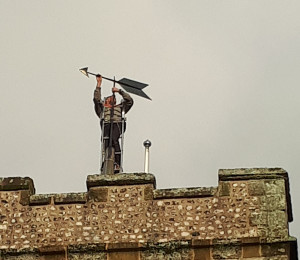 Getting the work done

One of the churchwardens found a local steeple-jack to take the vane down, and Katie approached an artisan gilder who lived nearby, both of whom took an interest in the work.

It was hard to get firm estimates, as it was impossible to get near the vane to inspect it. Not surprisingly, some extra work needed doing: there was water damage to the pole, and some of the fixing bolts were loose. In the end the overall cost came in at something under £1500.

Katie commented: “One surprise, to me at least, was to discover that the arrow head is filled with lead. This means that the flight of the arrow can be large and catch the wind, and it still balances well. So it looks really elegant.”

A bigger surprise was that six bullet holes – from a rifle – were found in the vane whilst it was being repaired. Katie has been told this is not unusual. During the last war large numbers of soldiers were quartered on the Downs, and perhaps they were responsible. After all, opposite the church is the pub . . .

With the simple finishing touch of a freshly regilded weathervane, the tower of Burpham church has probably not looked better in five hundred years. 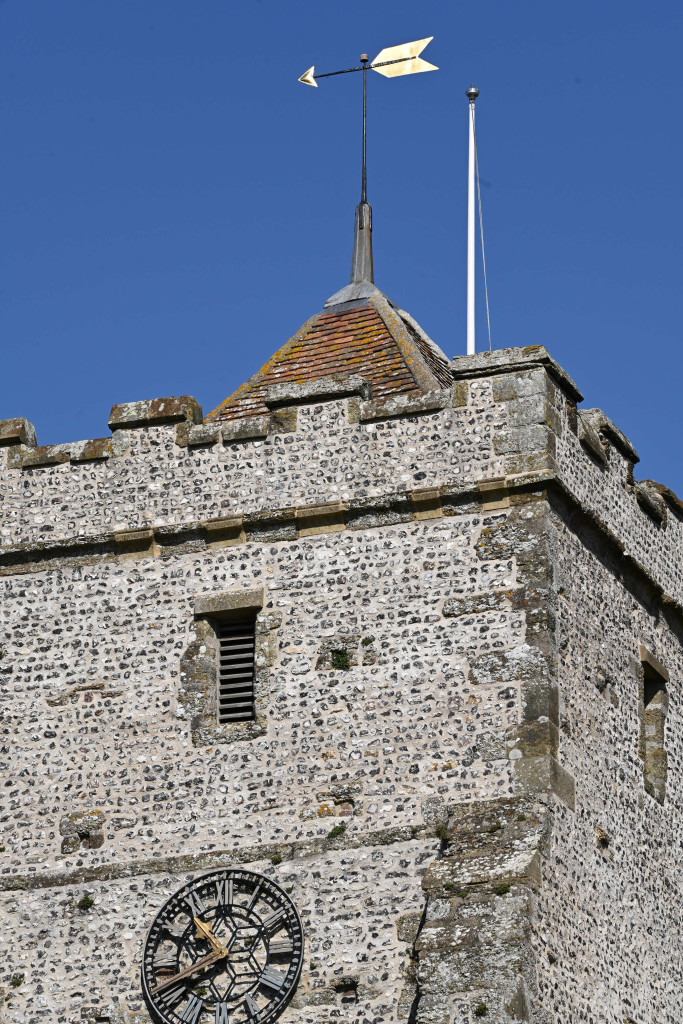