Journey of a barn church 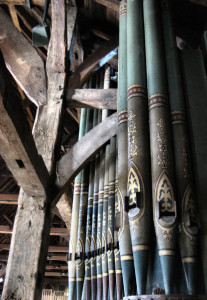 Thanks to feedback from several of our readers (I really enjoyed hearing from people), I’ve amended the headline – and added further examples of barn churches at the end of the story.
I heard about the Barn Church in Kew – one of the first barn churches in England – via a friend and was instantly fascinated by its story.

The church was once a seventeenth-century barn on Stonehall Farm near Oxted in Surrey. During the 1920s, the farm was about to be redeveloped into new housing. But heeding a call by the then Bishop of Southwark for twenty-five new churches to be built in his diocese, the owners of the farm, the Lambert family, decided to offer to move the whole thing to Southwark Diocese. The Lamberts, a churchgoing family, had always felt it looked as much like a church as a barn.

Paul Gregorowski, a senior member of the church congregation, pointed out to me that Bishop Cyril Foster Garbett’s call for new churches for Southwark was in the period following WWI when there was something of a spiritual revival. (In fact, the Lambert family had lost their son in the war.) Churches were needed across the country  and were obviously expensive to build. Especially, if they were entirely of bricks.

And so over the Autumn of 1926 the architect Edward Swan worked on designs and Mrs Cecily Lambert’s side of the family – the Hoares – agreed to finance the move. A Hoare relation also supplied the C17 2-inch bricks which matched the timber.  In 1927 the perfect spot in North Sheen (now Kew) was found with the land being freely offered by the Leyborne-Popham family.

In 1928 construction began, with the new church using the framework of the barn but with brick walls, a hipped roof and a much wider aisle. It is a moving story in every sense with the barn being taken down, transported in pieces, and then put back together in its new home. The builders had to carefully ensure that all the slates and timbers were perfectly numbered so they could be replaced exactly as they had been when being reassembled to create the long nave. If visitors look closely they can still see where the pieces are numbered. It must have been like a particularly difficult puzzle. 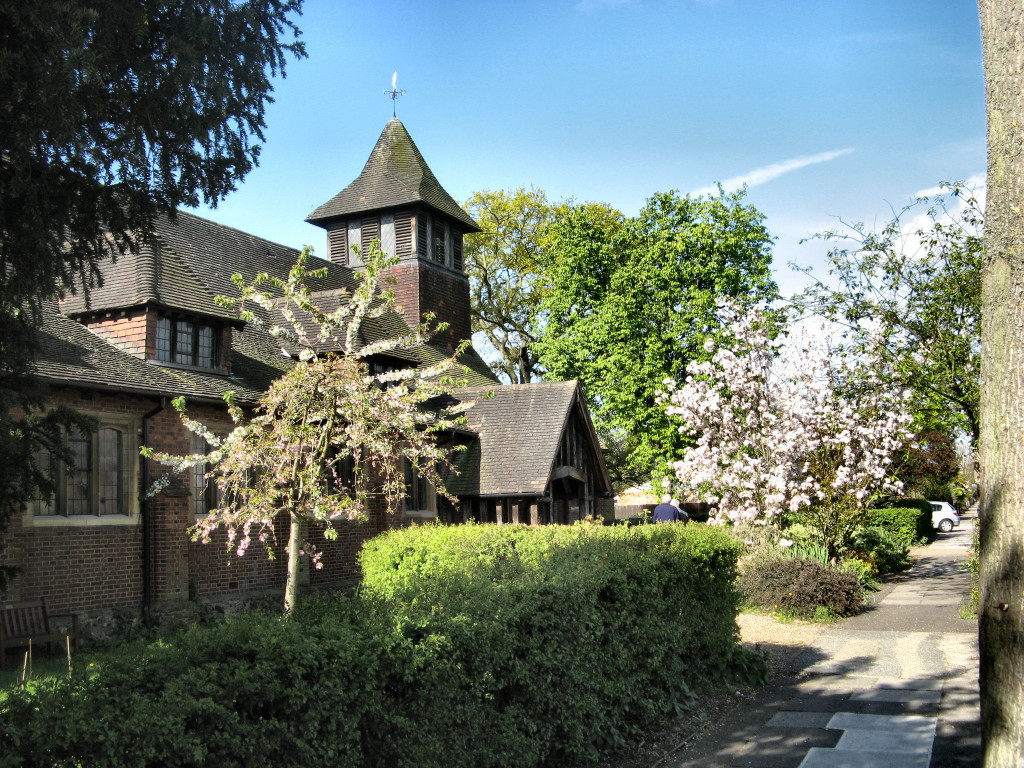 The church website www.barnchurchkew.uk/history suggests that the timbers predated the barn and were possibly taken from ships which fought at the time of the Armada, and that the Tudor panelling behind the altar may be even older. The church has never tried to get the timber dated but the story is well known.

The main posts of the newly built church tower were created from four oak trees also from the Stonehall farm. Ancient threshing stones pave the north and south entrances. 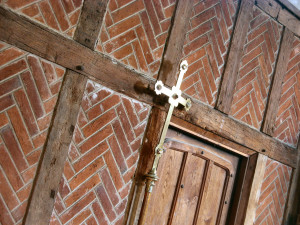 The foundation stone was laid on 1 May 1928 and the tiled roof was attached by 9 June. After that things slowed down and the last squares of the chancel floor were still being laid on the morning of the consecration service on 4 Feb 1929.

It became the sixth of the then Bishop of Southwark’s 25 new churches and the first barn church in the country. Consecrated as St Philip & All Saints, it is known as the Barn Church by locals and church websites alike.

According to Wikipedia it cost only £5,000 to build (exclusive of fittings), of which the diocese paid about half. It may therefore claim to be probably the cheapest church of its size ever built.

While Paul Gregorworski doesn’t see the Barn Church as a tourist attraction it does get a mention on the www.kewtw9.org/kew-other-attractions/ website and he has been known to show visitors around the charming building, either early on a Sunday morning before services or sometimes when they ring him up and he’s able to pop over to open it up.

In 2002 the long nave was divided into an area of worship and a parish room and facilities. “There were enormous fundraising efforts led by David Blomfield, a senior member of the congregation, and we added a kitchen and other lavatories and that was the reason it can be used so much as a venue”, said Paul Gregorowski. The pews were also replaced by chairs which helped make the space more flexible for events as they can be quite easily stacked in the lady chapel.

It has become a popular community venue and pre-Covid it was being used  for a large variety of events and community classes. It also has strong ties with the nearby Junior School. As with many other churches, Covid had meant the end of these activities but except for the first few weeks in the first Lockdown, services have gone ahead.

The Barn church is a popular concert venue, though Paul Gregorworski says it has a “very slight snag in that it’s got quite a tall roof and in terms of resonance it’s limited” – but that doesn’t stop groups using it. It’s also known for its hugely popular Christmas musical productions which are produced with the assistance of a member of their neighbouring church, St Luke’s, with which they have a close relationship. “She has put on fantastic productions like Joseph’s Technicolour Dreamcoat”, he said, “and the  venue gets packed”.

While being made of such ancient timber hasn’t caused any particular building-related problems, like many other churches the Barn Church has had lead stolen from its roof.

It has been in interregnum but had two Readers and two retired clergy who stepped in and filled the gaps and they held services every Sunday morning. The new priest for the Barn church starts on 27 June when a new chapter in the life of this church will begin.

The Barn Church is much-loved and its remarkable history is a reminder of earlier times and the can-do attitude of people nearly one hundred years ago who saw a new use for an ancient building.

Helpful sources: From Farm Storage to Place of Worship by Andrew Duncan, The Green, June 2000; church website www.barnchurchkew.uk/history; and Wikipedia.

* For those interested in following up further examples of barn churches, have a look at the Barn Church (Free Evangelical) in Great Totham, Essex which was converted from a barn in 1822.
https://historicengland.org.uk/listing/the-list/list-entry/1146634
There is also St Francis, Silver End, Essex which was built as a barn between 1690 and 1750 and converted to serve as a church for the Church of England and dedicated in 1930.
http://www.st-francis.org.uk/wp-content/uploads/2018/09/HISTORY-OF-ST-FRANCIS-CHURCH.pdf
And there are also two earlier examples which are both Roman Catholic. One is at Saffron Walden, converted to a church in 1907. More details at https://taking-stock.org.uk/building/saffron-walden-our-lady-of-compassion/. Another, more well known, is Giles Gilbert Scott’s conversion of a tithe barn at Midsomer Norton (1913):  https://gilbertscott.org/church-of-the-holy-ghost-midsomer-norton/

** And thanks to another reader: There is the Abbey Church of Christ the King, Park Road, New Barnet which was a barn moved to the site by J S M Ward in 1930-31 for use as the chapel of Ward’s Confraternity of Christ the King; the barn was consecrated by the Bishop of St Albans in February 1931. The whole extraordinary story is set out in Geoffrey Ginn, Archangels and Archaeology: J S M Ward’s Kingdom of the Wise, 2012.