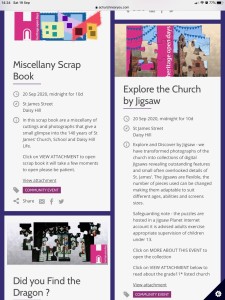 St James the Great church in Daisy Hill, Bolton participated in this year’s online Heritage Open Days festival from September 11 to 20th and while organiser Glenys Latham found opening the doors online a challenge she was delighted with the results.

And as she found, with the church being locked, it was lucky they already had a wealth of stored digital images and information to work with…

Participating in the Heritage Open Days Festival has been an ongoing commitment for St James the Great since 2017 – the installation of a toilet in the church the previous year meant that hosting events had become much easier. When Glenys suggested they take part in the Festival, the then vicar agreed, providing Glenys took the lead.

“That first year we had a Coffee Concert, and St James School, which is the CofE school connected to the church, was invited to make class visits to learn about the heritage of the church building – the whole school came. I realised the children didn’t know much about the church building, which is Grade II* listed. The following years we developed presentations and invited Eatock Primary School too,” she said.

What kind of activities did you previously offer?

“Our East Window is by Morris & Co. and was designed by Edward Burne-Jones in 1898; it’s one of his last designs before his sudden death and it was described as ‘superb’ by Nikolaus Pevsner. So for the second year we rounded up as many binoculars and telescopes as possible and I set up a window viewing point,” said Glenys.

In 2018 the church was put on the At Risk Register by Historic England because its 85-ft landmark bell turret needed restoration. “My husband Bob took the lead and applied for a National Lottery Heritage Fund grant. Based on our experience of Heritage Open Days, Bob put together a package of heritage projects to help get us the grant. We got £70,500,” Glenys told me.

They were going to deliver their main research for the heritage projects this year – this included both a study of the Morris window and Bob’s booklet From Cornmill to Church, which explains how the family who were the church benefactors came to build it in what was then a very deprived area.

“When Covid arrived, we thought we were scuppered,” said Glenys, “but then in June, the Heritage Open Day team, who had all been furloughed, decided to go ahead online. We decided to join in because it was a way to deliver the community activities part of the Lottery grant.”

So how did you go about it?

“As the editor of the church’s A Church Near You (ACNY) web pages, I had started to use that website for communication and I thought I could use it as our online platform. I had also discovered a website called jigsawplanet.com, where, if you join, you can upload a photograph and it makes it into a digital jigsaw. I came across the idea through Barnsley Art Gallery and I thought we could use albums of photos that ACNY couldn’t put up because of size limitations.

“I created two collections, one about the Morris window and the other about the often overlooked details of the church, like the reredos, which was designed by James Austin in 1924 and is reputed to have panels painted by Shrigley and Hunt of Lancaster. It became the subject of a digital booklet unpicking its symbolism and history.

“Obviously, during lockdown, the church was locked, so we were lucky that Bob is a keen photographer and we already had superb collections of church photos on our laptops. Also, he had taken detailed photos of the Morris window for the Heritage grant and I could turn those into jigsaws – highlighting the details that you would not normally see. Instead of people using binoculars, this time it was online,” Glenys explained.

The Morris window has an image by Burne-Jones of St John The Evangelist and contains an early symbol to recognise him by: a dragon coming out of a chalice. In 2019 the church had held a Find the Dragon event. This year, that was another online jigsaw challenge.

“Also, on the previous Open Days we had asked people to bring historical photos etc. as memorabilia and Bob had photographed them all, so I turned them into digital scrapbooks on the ACNY pages. And as part of the restoration works the contractor had taken photographs of the bell turret, so they were turned into a YouTube video with commentary and a link on the ACNY pages.” There was also a slide-show guided tour of the church (see link here). 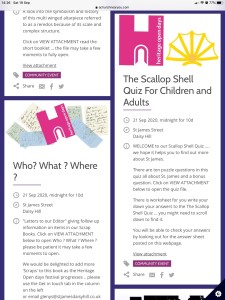 Glenys also adapted her Scallop Shell Quiz/Trail – about St James the Great – into an online quiz on ACNY, together with an answer sheet and downloadable and printable worksheets, and put up a Who Are They? exercise for children.

Did going online work out?

“We had well over 2,000 extra visits to the church’s page on the ACNY website during the ten Open Days (11­–20 September). And we’ve had about 300 to 500 regular visits a week to it throughout the lockdown. In previous years we had a visitors book and our maximum was 600, of which 200 were probably adults and the rest schoolchildren.”

What about the future?

“I am thinking about how we can combine a physical event and an online event. Online we attracted visitors from further afield than previous years. But both physical visiting and online offerings will be important. For example, visiting our church and viewing our East Window on a sunny day in September can be quite a spiritual experience, and people might decide to make a trip after seeing it online.”

What has participating in the Open Days meant for St James?

“They help you to focus on delivering projects and also to delve into your church’s history and heritage. During the four years we have been involved it has gone from a weekend to ten days because the interest is growing. Your own congregation too start to realise what they have.”

“Our increased skills in using technology are helpful and, now we have reopened, we can take bookings for services via a shared online calendar as well as via telephone! The Heritage Open Days team also encouraged us to join Twitter, so I now interact with other organisations and even our Diocese has retweeted us!”

Would you recommend participating in the Heritage Open Days? “Absolutely, yes! It’s a way of publicising buildings that are significant but might be ignored. You do have to be prepared to do a little bit more than merely opening the doors and putting the kettle on.”

Are you supported by the Heritage Open Days team?

“They are incredibly responsive for a small team. You visit the organisers area on their website where you register your building and yourself as the organiser and they will get in touch. They will provide online publicity material, including logos and banner headlines.”

It sounds like this year’s virtual Open Days were a triumph. “My first comment was, ‘I think we can scrape something together from our computers’, but after looking at the response to the jigsaws and scrapbooks I think we actually took it by the scruff of the neck…”