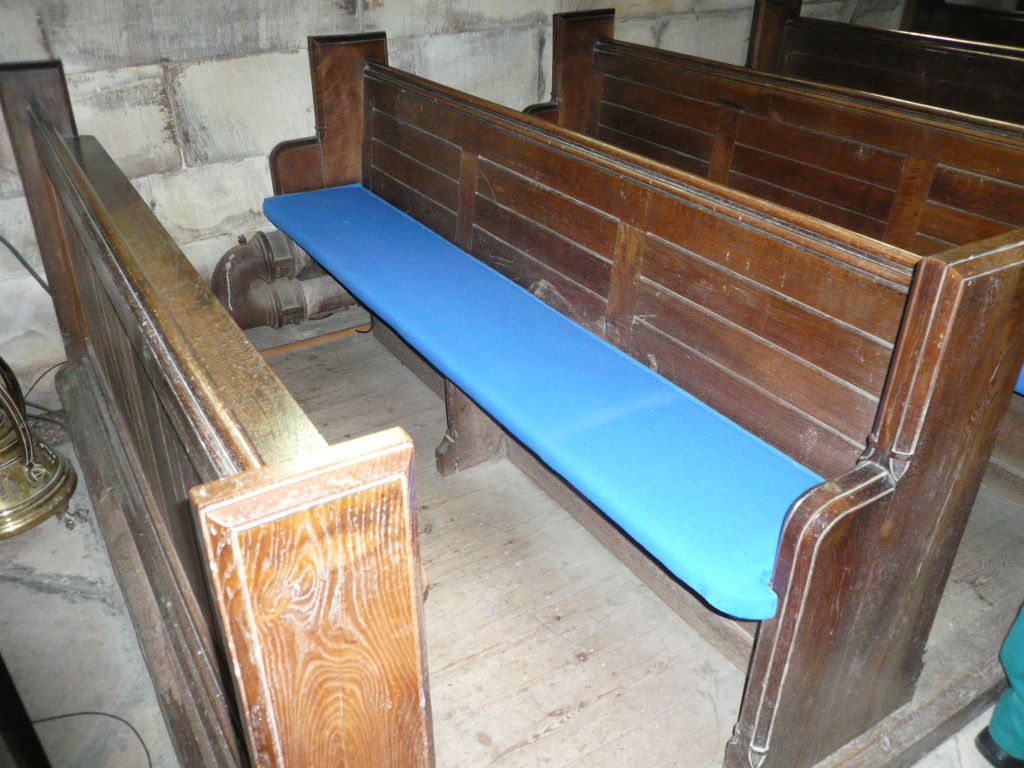 In February this year I spoke to the Reverend Jon Russell, of Holy Trinity Church in Whitfield, Northumberland. He told me “Whitfield church is the coldest church in Christendom . . . it’s under snow at the moment.”

However the church now uses heated pew cushions, and the congregation have been said to be  ‘basking like seals’ . . .

Earlier this year, the Church of England’s General Synod agreed new targets for all parts of the Church to work towards becoming carbon ‘net zero’ by 2030.

This hugely ambitious target is set twenty years earlier than the Government’s goal of 2050.

According to an article in The Telegraph (written before the Synod agreed on 2030 as its target date), the Church has recognised that it needs to move away from oil and gas heating and towards more renewable energy sources to supply its 16,000 churches, schools and community halls. Cost is involved too: it is estimated that central heating currently costs each church somewhere between £20,000 and £80,000 per year.

The Synod’s paper titled Climate Emergency and Carbon Reduction Target has identified part of the answer to the challenge as “heating people rather than heating spaces”. One option is to use electrically heated cushions on pews.

I spoke to the Reverend Jon Russell, whose Holy Trinity Church in Whitfield, Northumberland uses heated pew cushions. He said their success means his congregation are now ‘reluctant to leave their cushions for hymns’. He also told me about the biomass boiler in another of his churches and its mixed success rate, though that’s a topic for another time. We discussed the ups and downs of heating . . .

Why did you install the heated pew cushions?
“Whitfield church is the coldest church in Christendom. It’s about 750 feet up in the North Pennines, so it’s under snow at the moment [February 2020], and it’s a very large, very tall building. It’s like a model of Salisbury Cathedral and will seat 250 people quite happily; with a congregation of fewer than twenty that makes it a bit of a barn.

“We had an air-blower system, which theoretically blows hot air from vents, but the trouble is that after about six feet the air cools down, so you are just sitting in a draught. Because of the height of the building we decided upon the heated pew cushions, which have an added advantage: oil can’t be stolen if you’re not using oil.” The theft of heating oil can, of course, be a serious problem.

Do the cushions work?
“They were installed by a company called KovoSchmidt about six years ago. They plug into the electricity supply and only heat up when you sit on them, which takes the chill off for an hour. You still have to wrap up a bit, but it means your legs are warm and your hands are warm if you sit on them.

“The main body of the church now has them. The transept and the choir don’t have cushions because we hardly ever use those, so about half the church is equipped with them.”

What has the response been like?
“The churchwarden’s report was wonderful – a year after we installed them, he described the congregation as ‘basking like seals’, although that might be putting it a bit strongly. They’re now reluctant to stand up for the Creed or the hymns. There was a time when any kind of movement got circulations going again, now it means leaving your warm patch!”

Are they eco-friendly?
“In the sense that electricity can be generated by renewables, and also because only those seats that are being used really heat up. To heat the whole building it’s the same cost whether you’ve got ten people or a hundred, and now we’re not heating the whole building, so in that sense it is much more economic.

“We’ve not noticed a vast increase in our electricity bills – we’re really only talking about an hour a week, whereas to have an oil blower system on you’d need it on for four or five hours to heat the building.”

Do you get a cushion?
“I do, but the trouble is I am not sat down for very long. When you go into some great cathedral and see the clergy clad in greatcoats and all the rest of it there is always a theological justification, but the basic reason is to keep warm!

Would you recommend the cushions?
“Yes, they are maintenance-free. Just make sure you have an adequate electricity supply, because if the church is full and all the seats are drawing power then that is a significant draw on the current. If we have a big funeral, for instance, or the church nativity play, where all the parents and grandparents come along, there’s a risk of the organ cutting out or something. But that’s really an installation issue. Once they’re in you don’t have to do anything to them.

“So, six years after they were installed, they are all still working fine. They are also aesthetically pleasing because they can be in pretty much any colour you like. We chose blue – a Royal Blue – which fitted in with the décor!”

Whitfield church is in the Allendale benefice https://allendalechurch.co.uk/churches

The photographs are courtesy of KovoSchmidt Ltd, but the company had no other hand in the preparation of this article. The HRBA endorses no particular form or manufacturer of church heating equipment.